When did you first become an instructor and how did it happen? 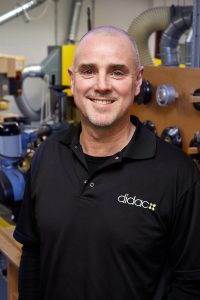 I qualified as a RTITB instructor in July 2004, converted to ITSSAR in Nov 2004, then became an ITSSAR accredited Tutor in May 2012 and passed my NPORS instructor course in May 2015.

Prior to becoming an MHE instructor in 2004, I was serving in the Royal Engineers, British Army and had passed an instructor course and held various training positions. It was then that I realised I enjoyed training people.

What is the best part of the job?

I thoroughly enjoy carrying out the duties of an ITSSAR Tutor – training personnel to be instructors on pieces of equipment they could only operate prior to the course. And then seeing them deliver various practical and theory lessons at the end of the course which they would never have dreamed of before. And then the smile on their face when you’ve told them they have passed and that they are now fully fledged instructors.

What is the worst part of the job?

The travel – I know we as instructors do not travel as far as a lot of other personnel in the Company but living in the South East of England and having to battle with a certain M25 is quite painful and very time consuming at times.

In 1994 I was selected to represent the Royal Engineers as an instructor in New Zealand for 4 months, training the Kiwi Royal Engineers on predominately bridge building and mine warfare.

For 6 months in 1998 I delivered mines awareness training in Bosnia to school children. That was very enjoyable and extremely rewarding.

The other side of the world to New Zealand – British Army more recently two different jobs in Holland – with Didac.

Favourite equipment to train on?

Transportable Forklift Truck – or as most people know it as – Moffett Mounty. These are very lightweight forklift trucks carried on the back of a lorry, but still have a rated capacity of anything up to 2 ton. Mounting and dismounting the truck onto the back of the lorry is my favourite part of the training

Tell us something interesting about yourself that we may not already know…..