We asked our team to tell us a bit more about themselves and their training careers, the good, the not so good etc. 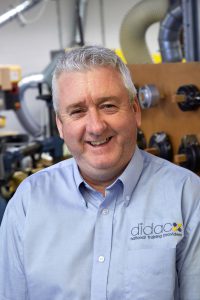 First up is Midlands based Kevin Foley…

When did you first become an instructor and how did it happen?

I first became an Instructor in 2004 after being made redundant from a car parts factory, and with my redundancy money I paid to do a fork lift instructors course with a local company.

On passing the course they offered me terms of employment which I happily took to gain the experience I needed to progress.

What is the best part of the job?

The best part of the job for me is meeting different people and going to different locations the enjoyment it can give to the delegates we train. Some may struggle at first with the new skills being taught but with determination and hard work can achieve a good pass. Getting them there is very satisfying.

What is the worst part of the job?

Some parts of our work can be less enjoyable for example travelling long distances (It’s not all glamour), Staying in a nice hotel can relieve the stress of travelling however so you’re nice and refreshed for the next day.

My most memorable jobs include climbing to the top of St Paul’s Cathedral and looking over the views of London on a sunny spring day during a break in training. They were also filming the new Mary Poppins film there at the time but unfortunately not on that day.

Silverstone race track is always a pleasure to train at, and the team that work there in trying to keep the day to day amateur racers safe are always great.

Palmer Sports was another enjoyable place I have visited for training. Apparently the Fifth Gear series was filmed there so I’m told although nothing was being filmed while I was there.

Pinewood Studios was a potentially exciting job to do. On arrival I was signed in and escorted to the place where training was to take place. I was told that I may see actors and actresses along the way as filming for the then new Star Wars film was going on. Unfortunately, on meeting my contact I was told the training area was going to be 2 miles away at a not so glamorous garden centre! Never mind as nothing surprises you in our line of work.

The furthest distance travelled was probably up to Glasgow a mere 324 miles away which I chose to drive to (with several breaks along the way). That was a while ago however before I joined Didac.

Abersoch in Wales I do remember as being a particularly great drive, driving through Snowdonia National Park with Spectacular views of Lakes and rivers on a boiling hot day, stopping several times just to take photos of it’s wonderful sights and natural beauty.

Favourite equipment to train on?

I don’t particularly have any favourite equipment I train on as enjoy them all!  I would have to say if it’s a nice sunny day I would love to be working outside and if it’s raining inside! So for me any equipment is fine providing I don’t get too wet!

Tell us something interesting about yourself…

In my spare time I enjoy Snooker usually playing at least once a week. I managed to beat my highest break (and clearance) recently being 96 after a previous highest break of 83.

I was pretty sporty in my youth having played football in my younger days on Saturday and Sunday. I also ran cross-country for the School and the County (once) and I also played Tennis for a local club. I also played golf and was a member of Oundle Golf Club for 12 years.

Oh… and when I was about eight I played the Piano accordion….  Badly!!